Hey hey out there!

Finally getting a blog post up! I’ve been busy sleeping in my free time. (Only partly kidding.)

I’ll admit my life right now seems a little consumed by this whole detox thing lol. While it’s definitely gotten easier, there have been different phases and supplements and body changes to go through and get used to. And, being sure to LISTEN to my body has left me resting a LOT. Hence, the #ivebeenbusysleeping part. So, I’m still taking the stance that while this is not easy, it’s not hard.

Given how this has went so far and some things I’ve been researching along the way, I’m not sure this strict of a nutrition plan is a good idea for someone with a past history of an eating disorder like binge and closet eating. I will admit I was a little worried that this would set me up for failure. And, while I’ve stayed strong and on the plan 100%, I’m not sure I was quite ready for this. AND, I wanted to say this part in case you’re out there thinking of doing a detoxification plan or something really structured and strict and have had prior issues with food. I would still do this, and I know I CAN do this! And, it really only is 21 days…. But, it has created a lot of thinking about what I’m gonna eat when I’m done and I have gotten a little fixated on what I’m not having right now and that’s not exactly the healthy thoughts I was hoping to have. So, I just want to throw this out there to proceed with caution if you have any similar past behaviors as I do. While this is not a weight loss plan and is designed to help reset your body to “factory settings”, I just feel like even as much as your body could need and benefit from something like this, I want you to be sure you’re really in a good place with food first 🙂

Ok, now THAT being said, even given my past, I’m proud and determined to only go up from here! (or dare I say DOWN lol…but you know what I mean)

What this has taught me already is that if I can do THIS with my eating, I can do ANYTHING.

I will be sharing more of the things I’ve went through and that are so common with this after I’m done. My accountability partners often say, “Oh wow, I’m noticing that, too. Or that happened to me, too!”

Here are some of my food pics from the past week 🙂 I’ve still been eating a lot of the same thing to save money and time 🙂 And, it’s actually TOTALLY ended up saving me…..money and time! And, I don’t just mean as opposed to doing the full plan (I’m following something called the Crunch Plan where you repeat meals throughout the week) but for my life in general! My food budget and the time I’ve spent on food is far less in these two weeks than a typical week (aside from buying organic frozen blueberries for almost $10 at our local Wal-mart! yikes not cheap)! What it hasn’t saved me time from doing is actually eating! Ha, I swear it’s so much food that it takes me like a half hour to eat the meals. And, gotta love all the colors and the smells!

And, here are just a few of the temptations I faced!

#yesthosearecupcakesandididnthaveany ~ And, my subscribe & save from Amazon. #imayhavecriedalittle
And, it’s PEEPS season! YAY! I had to post on FB to see who loves them like me. I would say more people do NOT in fact love them…but it was a closer race than I thought it would be!

How many days do I have left? Well, the countdown is officially on! I’m on day 15 of 21!
And, I couldn’t be more excited about my results just two weeks in!
While I still haven’t stepped on the scale or remeasured, as I LOVE to tell my clients, pics don’t lie 🙂

There ya have it! The time really has went fast! And, I’ve been working pretty diligently behind the scenes on my next step. Let’s just say I’m so ready for it this time. AND, I so so so miss my workouts! I cannot WAIT to get back to them! Yoga has been great and necessary BUT I need to get my sweat on and get back to weights! Any guesses at to which program I’ve decided to start after I’m ready endurance-wise?? It’s not what I had originally planned 🙂 #staytuned

And, I just had to share this pic of my little that came up in my memories this week. This was one of my fave pics of her when she was little 🙂 She turns 7 this month! #wheredoesthetimego #stopgrowing #yesshesstillaskinghowmanyhourstilherbirthday #imeanhowcuteisshe 🙂

And, instead of my live loved sig, #igotthis

So, today was a really good day! I always like a good challenge, especially when I’m done…lol.
I honestly really liked the Refresh. I felt pretty rough the first day. By the end of the day that day, my head hurt so bad that it was actually making me nauseous. I’m not gonna lie that I almost got to the point where I was telling myself it wasn’t worth it, but then I realized that if I felt the way I did, my body definitely needed a detox! And, each day I felt better and better so I knew it wasn’t anything in the Refresh itself that made me feel that way.

I want to post these pics about as bad as I want a root canal, but I think they really show the potential of this quick reset. (I didn’t wear the same thing for three days btw…just for the pics…maybe that went without saying…lol.) I’ve talked before about how bad I can bloat and my before pic pretty much looks like I have a food baby. But, the good news for me is that I lost 2-1/2″ in my abs in these three days and 8″ overall, plus 4.6 lbs. So, yeah, I’m excited about my results…no doubt…but I’m way more excited about how I feel! And, even if most of it is water weight, I feel light, I feel way more energetic, and I feel like I’m back on track with my nutrition thanks to it!

So, now I just have to say that I LOVE the image at the top. I’ve been losing ground lately in my health & fitness journey. And, there are several things I’ve been focusing on to turn my setback into a comeback….and the Refresh was just one of them….but that’s just it….I will have setbacks. But, they won’t result in me giving up on my goals. Not anymore. 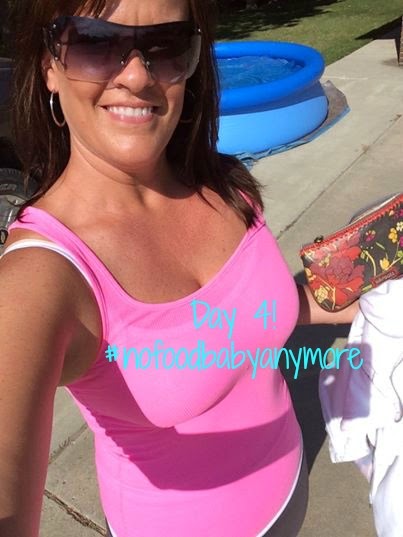 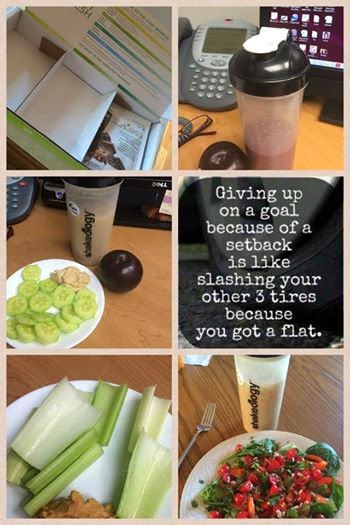 Day 3 of the Refresh is almost in the books!
I’ve loved this quote in my collage since the first time I saw it. I was off track. No lie. But the thing I like best about the “new me” is that my setbacks lasted a helluva lot longer before. There is always time to turn things around….always.
So…..I will say that I’m anxious to be done but that I will definitely be pulling this little gem of program out of the hat every few months or before big events….like already thinking this will come in handy just before Cancun!
But, yes, right now I’m anxious for almond milk in my Shakeo, and things like greek yogurt and eggs and a spaghetti squash boat with ground turkey and tomatoes and mushrooms and onions and just a dusting of 2% cheese….ok, yes, I’m dreaming of food a little tonight as I type. I may not have had food on the brain had my husband not had pizza in front of me tonight. And, I probably could’ve picked a better night to be perusing Pinterest for recipe ideas.  Either way, I think I can safely say that I made it thru and it went really well!
Check back tomorrow evening for final results! 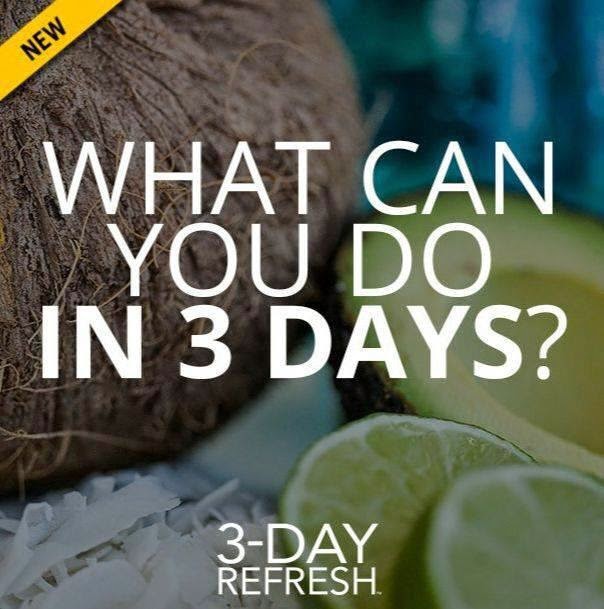 Ok….so not gonna lie….today has been rough. There is NO DOUBT IN MY MIND that my body is detoxing with Day 1 of the Refresh.
I was well aware of the challenges going into this ~ 3 days of eating a reduced-calorie diet, 3 days of eating vegan, 3 days without whole grains, and 3 days without caffeine.
So, why would I still want to do it?
Because I really have needed a reset. I’ve been struggling with my nutrition since I was in Vegas in June and actually bought this kit down there and had intended on starting it right away when I got back. And….then….I started making a BUNCH of different excuses to put it off. Birthdays….weekends and BBQs….golf….fishing. I finally told myself that there will ALWAYS be something that’s coming up this summer and if I really wanted to get back on track and kickstart my focus on nutrition, I had something at my fingertips to do just that.
I felt pretty good this a.m. after my Shakeology (with water mind you…and I LOVE LOVE LOVE my shakes with almond or coconut milk…so I was kinda nervous about that!) and my Fiber Sweep (I knew to drink this as fast as possible before it sets up). But, it didn’t take long after for my caffeine withdrawal symptoms to kick in. I’m sure some of my headache was also sugar withdrawals from the weekend, but, I honestly only drink coffee with flavored creamer.
(OK OFF TOPIC NOTICE ~ Here is my fav creamer these days but my advice would be to NOT try it…lol! I talk myself into creamer being okay because I usually only have a cup or 2 of coffee a day and I try hard in other areas to eat clean but I know I’m only kidding myself.)
It’s recommended to not drink coffee during the Refresh but if you do its even more recommended to have it black with only stevia if needed. 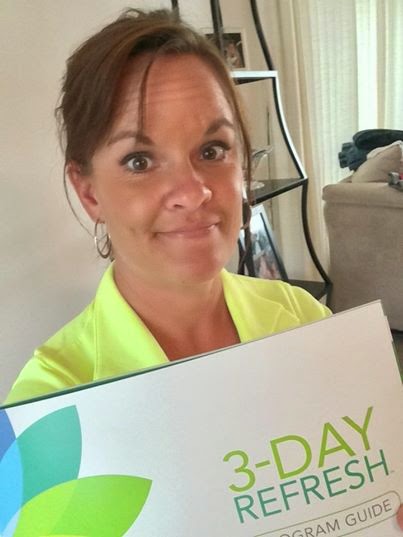 This is my half-smiling face after dinner tonight….which was the Vanilla Fresh Shake and fresh green beans with EVOO, garlic and lemon-squeezed juice. I totally could’ve eaten a 5-course meal tonight BUT I honestly already feel “lighter.”
I usually try to close my kitchen after dinner but it doesn’t always work. It’s working tonight! Even if I have go to bed at 8!!!
Tune in tomorrow night for a Day 2 recap! 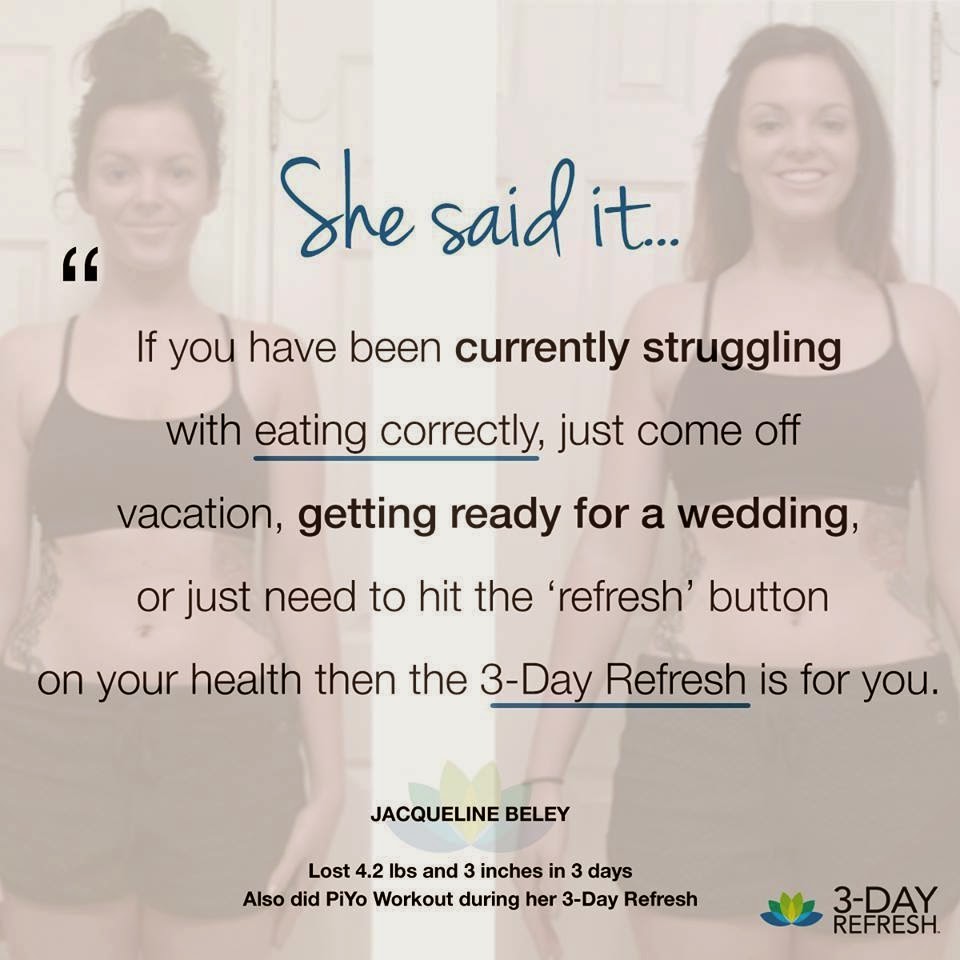